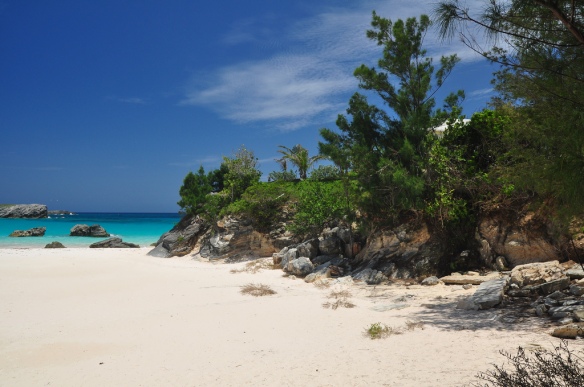 It was a hot late July day. I was working out of the house as usual. My wife, Anne who works in town had taken the day off to go to the beach with friends. Around 10 as she was getting ready to leave her friend Mary called to say that she couldn’t make it, her son had come down with the flu and she had better stay home with him. Anne was a little disappointed but said she understood and perhaps they could do it another time.

I was not getting a lot accomplished myself. Seems like July and August people are in vacation mode and if you can reach anyone they’re really not focused. “What the hell,” I thought, “I’ll take Anne to the beach, it’ll be a nice little get a way.”

I thought I’d take her to this little nude beach I learned about while chatting on the net. Anne didn’t know about it and I thought the shock might do her good.

On the way there Anne talked non-stop about this and that. I don’t know really, I was totally caught up with my imagination and what I thought might happen once we got there. I must admit I was getting quite aroused just thinking about the possibilities and had quite the woody as we pulled into the parking area.

As we walked down the wooded path towards what turned out to be a beautiful sandy and pebble beach along an open yet secluded section of a small winding river we saw others coming and going down various paths leading to the same point. I picked out a spot surrounded by tall grass where we had a pretty good view of those around us yet we were rather secluded. As I was spreading out our blanket Anne stood holding our books looking around. I was watching her face, looking for signs. Suddenly her eyes opened wide and her mouth dropped. Now Anne’s not a prude and she’s pretty hot to look at and touch. But lets just say that she’s not too experimental and definitely we were in a sexual rut. She turned to me and whispered, “Steve, these people have no clothes on.” I looked up as if totally surprised and unaware. “Cool! I exclaimed, well you know what they say, when in Rome.” With that I dropped my shorts, reached over and took my book out of her hands and lay down on the blanket.

Anne just stood there looking around. “Quit staring and join me,” I suggested. Well I’m not taking my clothes off she replied. “You don’t have to,” I said, “but you’re going to look totally out of place and besides who’s going to look at you when everybody is the same. Look just take your top off, if you feel uncomfortable in a bit put it back on, if you don’t and you want to join the party then you can take your bottoms off, OK?”I guess she must have thought it sounded logical because she lay down on the blanket, took her top off and began reading her book.

I didn’t press the issue and she seemed to be OK with everything. I would guess we had been there about an hour when the sun on my face became blocked. I looked away from my book to see what was up, Anne did the same. There standing over us was a tall, tanned, guy of perhaps 40. He appeared to be in pretty good shape and had a rather large cock hanging down between his legs. Even soft it had to be at least 8” long.

“Hi,” he said, “I’ve been sitting on the other side of the river watching you guys and thought I’d come over and see what you’re reading.”

He said his name was John and pointed to a chair across the water and then looked back at us. John and I exchanged pleasantries while Anne just kind of sat there watching us. I could tell she kept looking at his cock though she didn’t want either one of us to notice. I could also tell that she was getting quite aroused as her nipples had grown quite large and pointed up to the sky.

At this point he looked at me and said, “I couldn’t help but notice that you have a rather nice cock.” “I really like the ones with large heads like that.”

I had always thought my cock was average at best, a little on the small side but still I thanked him for his compliment. Just knowing he was actually looking at my cock that way gave me a shiver and it jumped and twitched a little. I blushed and told him that his was very nice too, quite impressive actually.

Anne smiled and nodded in agreement, a quite breathless yes slid out of her voice. “Can I touch it?” John asked.

Now I am not gay but I am open to pleasure, besides I thought, I brought Anne here to get out of our sexual rut. “If Anne say’s it’s OK I replied, then please be my guest.” We both turned to look at her, my cock now semi erect, John’s beginning to show signs of life too. Anne tried to reply but no words came out, slowly without taking her eyes off Johns growing member she nodded her head yes.

John lowered his knees to rest on the blanket in front of me. He then looked at Anne and whispered thank you. Turning back to me he reached out with his right hand it wrapped it around my now hard throbbing cock. I heard Anne moan and turned to look her in the eye and smile.

“Ummmm,” John whispered, “this is so nice.” He started to slowly slide his hand up and down my shaft. After a few strokes he wrapped his hand tightly around it and put his thumb over the hole and squeezed and pressed down with his thumb in unison. I let out a huge moan and almost came right there.

I looked at Anne and she had her hand down the front of her panties rubbing her clit. “Take them off, John asked her as he rubbed my balls to calm me down, please I want to see you too.” Anne didn’t look to me for approval, lifting her cheeks off the blanket she slid her panties down to her ankles then kicked them off.

“Oh my, you’re beautiful,” John panted, “please spread you legs wider, let me see all of you.”

Anne lay back on her elbows and with her feet on the blanket she pushed her knees out and down showing John her beautiful wet and now dripping pussy. “Oh God,” he exclaimed, “may I touch you too?”

Anne simply closed her eyes and let her head fall back. John looked to me and we smiled as I nodded yes, “Please do,” I said.

John’s hand slid off my cock leaving it feeling cold and alone with out his soft warm stroking. I must admit I had a moment of jealousy as he released me and reached for her. Not because I didn’t want him to touch my wife, but because his hand felt so good around my cock.

He sat down beside Anne midway and pulled her to him. Leaning over her and staring down into her eyes he let his hand fall to her mound. Anne moaned and twitched as the weight of his hand pressed down and his fingers cupped her throbbing dripping pussy.

His index finger lifted and found her clit and began rubbing and pushing it around. Anne bit down on her lower lip and lifted her pelvis up to his hand. Her breathing became hard and erratic and soft whimpering moans began to escape her mouth.

Without a word she reached over and grabbed John’s massive hard standing cock. He must have had ten inched and it was as big around as her wrist. Anne began stroking and rubbing John as he continued to tease her clit. Now his head was back and his breathing was labored and matching hers. John slid first one, then two fingers into Anne’s pussy and began thrusting and pushing against her. She just moaned harder and louder as he applied weight and friction while finger fucking her.

Now I love Anne but it has always been so difficult to get her to suck my cock. After hours of begging she will lick it and suck it a few times and that’s it. You can imagine my surprise when she lifted her head and put it in John lap without being asked.

Then she opened her mouth and after a few seconds of adjustment to his size began sucking his huge hard cock like she’s does it everyday. One hand was cupping and fondling his balls as her mouth bobbed up and down on his big cock. “Oh my God,” John moaned, “:that is so damn awesome.” With out taking her mouth off his cock Anne looked up at John and smiled.

Putting her arms around his waist and letting her warm dripping mouth slide off his cock Anne rolled back over onto her back pulling John with her. She bent up and kissed him and whispered, “Fuck me John, please.”

John didn’t need to be told twice and knelt between her legs. Anne grabbed his cock and pulled it into her waiting, wanting pussy. Slowly at first but picking up with intensity John began pumping all ten inches of meat into my pretty petite wife.

She wrapped her legs around his ass and met his every stroke. I sat there with the biggest hard on of my life watching this guy we had met only minutes ago giving my wife the fucking of her life. She was crying, begging John to fuck her harder and he complied with her every wish.

Finally John’s back arched backwards and he pushed his cock deep into Anne’s pussy holding it there. You could see his balls working as he blew his load into her hot box. Anne trembled with one orgasm after another as she pulled John down to her moaning and kissing his lips.

After a few moments John pulled out of her and sat down between us. “Wow! That was fantastic!” he sighed. Looking down at my still throbbing rock hard cock he said, “Here, let me help you with that.”

John lifted his head up off my lap and turned to Anne, bending to kiss her. He kissed her full and hard. He then turned back to me. Taking me totally by surprise he bent in and kissed me full on the lips. He reached down and fondled my now limp cock as his tongue found mine. I returned the kiss as a moan escaped my lips again. Standing up he looked to both of us, “Thanks a lot,” he said, “it was great to meet you. I hope to see you around again some time.”

With that he turned, strolled back across the river, picked up his chair and walked away…

Here you have other remarkable naughty tales about beaches, both with a “loving wives” theme, enjoy them!

Do you want to read more awesome sexy stories? Proceed to my home page if you wish, be my guest! Or you may also go to my Facebook Page.

Photo: “Beach” by kansasphoto, published under a creative commons license.